The bad news: it's not real.

You might have seen a review on Yelp that said it's perfect for a girl's night out or a Facebook review that mentioned it being a crowd-pleaser at a neighborhood block party. You may have been impressed by its 19,000 Twitter followers, and considered hiring this mobile song-slinging truck to drive up to your next outdoor shindig.

Kashmir says, "I wanted to see firsthand how the fake reputation economy operates. The investigation led me to an online marketplace where a good reputation comes cheap."

She found all these offers on Fiverr.com, a "global online marketplace for creative and professional services."

"When I identified myself as a journalist and sent messages to people offering to write reviews, they said, 'We only do real reviews. We really try the products. People send them to us.' But when I approached them undercover with money in hand, it was a different matter."

Fusion's art department came up with a logo and a photoshop composite of a super party truck. Armed with that, a new Gmail account and a burner phone number, she created a Yelp profile, a Facebook page, a Twitter account, and a page on Launchrock - a start-up that encourages you to make a website before your product is real to gauge interest for it. She set up Google Analytics so she could seen when someone from Yelp visited the Launchrock page before she let the Yelp profile go live. 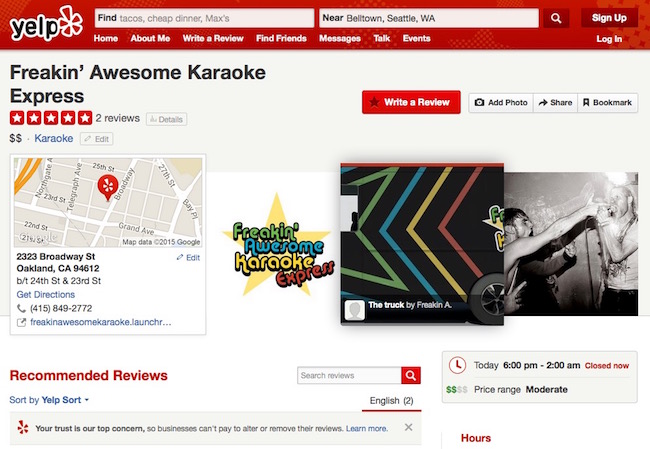 Since the story has come out, the paid reviews have been filtered, but you can see them here: 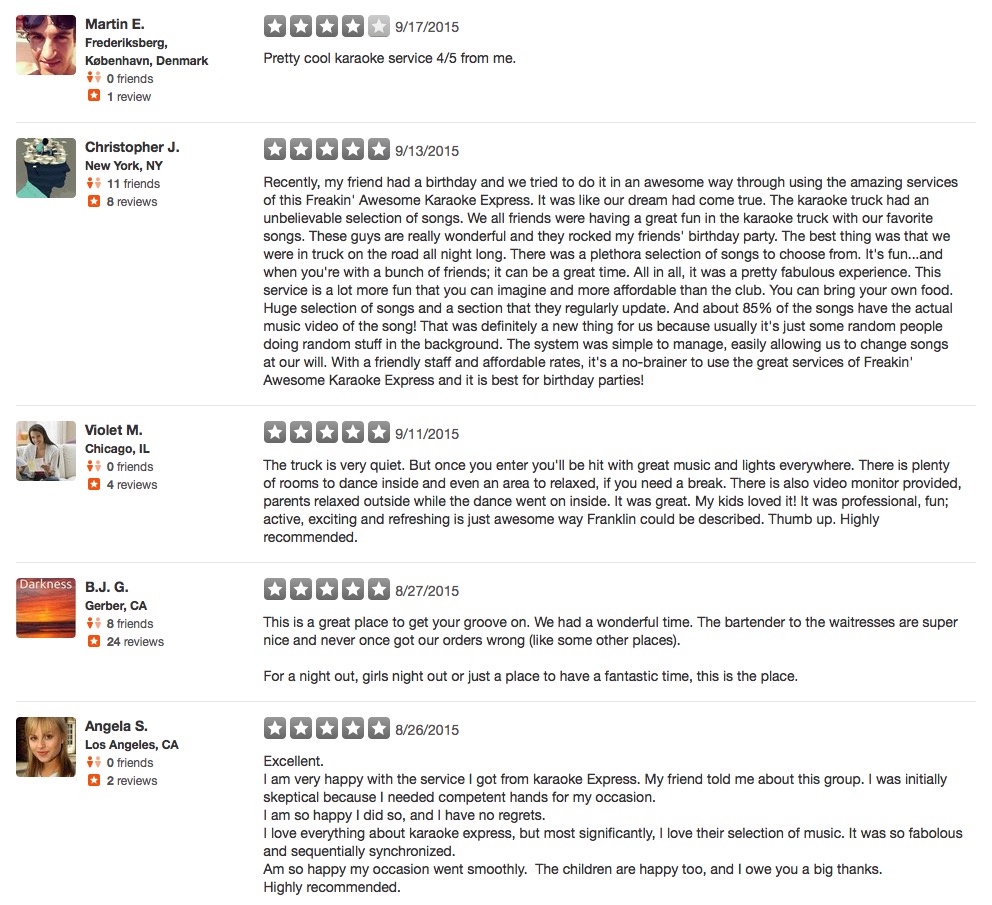 Kashmir interviewed a woman who wrote a fake Yelp review:

I eventually came clean with her, and told her that I had hired her undercover and that she had written a completely fake review for my karaoke truck. She was silent for a while and then told me she thought it was real because it had a website. She said she's sympathetic to new businesses that need reviews to get first-time customers through the door.

"I don't mind helping out a new business or a business that doesn't have much of an internet reputation, even if I haven't been there before," she said. "Plus, businesses need positive reviews sometimes, because people are more likely to leave a negative review than a positive one."

"Everyone online needs to use their best judgment," she said. "Just because a product has good reviews doesn't mean it's good. You can't believe everything you read online."

Kashmir's story appears here: "I created a fake business and bought it an amazing online reputation"

Important: Although this story is eye-opening and humorous, we must warn that buying Yelp reviews can have terrible consequences for your Yelp business page. Yelp will not only filter reviews, but publicly shame you.

In Washington State, Seattle restaurant owners are facing the minimum wage increase that came into effect on April 1st.…

Why is Yelp Filtering My Good Reviews?

As a business owner, you need to know that Yelp filters both positive and negative reviews. Yelp has decided…