After heading up a landscaping company for over 20 years, Matt Stachel was fed up with the way some customers were treating him and other business owners on online review sites. So two years ago he launched NastyClient.com, what he calls the "anti-Yelp".

For a small yearly fee, business owners can post reviews of customers that have wronged them. the site has roughly 2,000 members that have posted 4,000 "nasty clients". An estimated 50-60% are located in the tri-state area around Philadelphia.

I want the consumer to say, "You know what? I better pay my plumber because I don't want to end up on Nasty Client. I don't want to be calling heating guys in January because my house has no heat, but everyone is saying they're don't want to work for me because I have three reports filed against me." 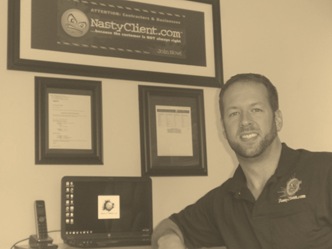 Here are some excerpts of reports filed on some of Nasty Client's nastiest clients:

A landscaping client in Lahaska, Pa. accused of nonpayment of services:

"He got me to drop my guard by being extremely nice and polite in the beginning, only to change once additional work was done without a contract. This very crafted scheme was taken out on several other contractors that worked on the property during our time and after we were thrown off the property. He was very careful not to sign things and be conveniently absent or very busy when asked. We are out tens of thousands of dollars along with others totaling approximately $80,000 or more."

A lawn maintenance client in Sussex, N.J. accused of ceasing to pay his bills:

"He was always a late payer but ended up at one point or another paying. He always had talk about big install jobs because he just purchased the house so I didn't want to lose the customer. Then he decided he would just stop paying but then got mad when I did not plow his driveway. Stay away from him."

A wall installation client in Bensalem accused of being abusive:

"He asked repeatedly how we were doing everything, even though it was all spelled out in his contract. When the job was done he called me and said that the wall I built on the property line of his house and the neighbors was now making his lawn a big puddle. He then said that he wanted me to lay sod down where I put grass seed. Even though it does state in my contract that grass seed will be installed in the damaged areas of the lawn. When I said no to the sod he threatened to sue me and let the "whole" township know not to use my company."

It's not Yelp's Fault

When it comes down to it, Yelp and Angie's List are just another amplified voice of the customer. It really is the customer (or ex-customer) that's making trouble. If it weren't these websites they were using as a platform, it would be another. There are hundreds of such sites, but these get the lion's share.

It's Better To Avoid a Review than to Respond to It

TalkToTheManager.com gives you one last chance to find out what your customers are thinking and fix the issue before they give up on you and write a review that hurts your reputation. Give them that chance to help you!

Here's how it works.

Advice from the Yelp Elite on How to Avoid Negative Reviews

Many business owners that are aware of Yelp and follow their ratings also know of the Yelp Elite. Elite…

A Complaint is an Invitation to be Awesome

We tend to react negatively to customer complaints. Business owners like you are doing your best to deliver quality…